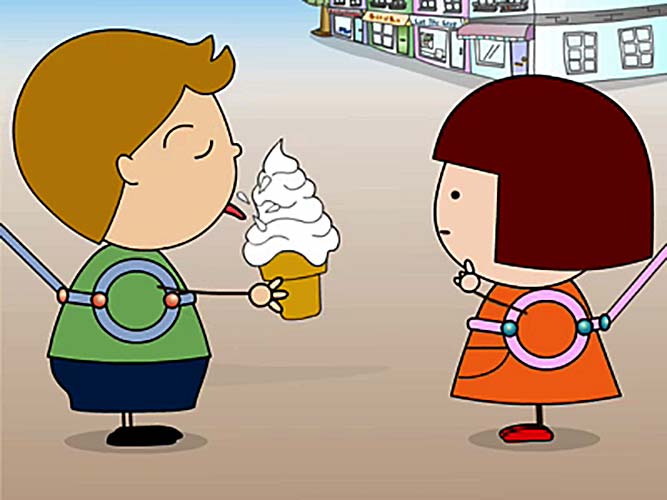 A selection of Flash-created animated shorts. Conception and all production – including sound design, voice-over and animation – by Icecandy with help on music composition from Justin Bryant and Gareth Cousins.

Little Didi
Little Didi is a series of 7 x 60 – 90 second animated shorts and more! Little Didi, her cousin Ken and dog Travolta have fun, adventures and get up to no good. Aimed at the kids and family entertainment market, Didi has a Flash-based web site www.littleDidi.com with episodes, character profiles, linked social network profiles, an e-card application and a merchandise shop. The e-card application was built with a Flash front-end and PHP/mySQL back-end.

Legend of the Aubergines
Legend of the Aubergines is a series of 5 x 30 second animated shorts and paired ringtones/videotones. The Aubergines are in search of a long lost magical property that will put an end to their dispute with the opposing banana clan. They scour the world looking for it and everywhere they go they learn the appropriate ethnic dance to blend in with the locals… currently appearing in a Hawaiian style tropical island, the Australian outback, the Scottish Highlands, and in a hip-hop video. The musical style of each animation matches the scene setting. 3 episodes of The Aubergines were selected by Children’s BBC for their MyToons web site. One of the episodes was broadcast on CBBC in October 2010.

Kinta The Surfing Sushi Chef
“Delivery” – one episode in the series “Kinta The Surfing Sushi Chef” – was short-listed for the Nokia Shorts film competition 2006. Nokia Shorts was a UK based competition for short 15 second long films intended for mobile phone playback (it ran for several years, but is now defunct). The animation features “Kinta”, one of Icecandy’s stable of characters, and is one episode in a series of 5.

Animation, Kids
Scroll back to top