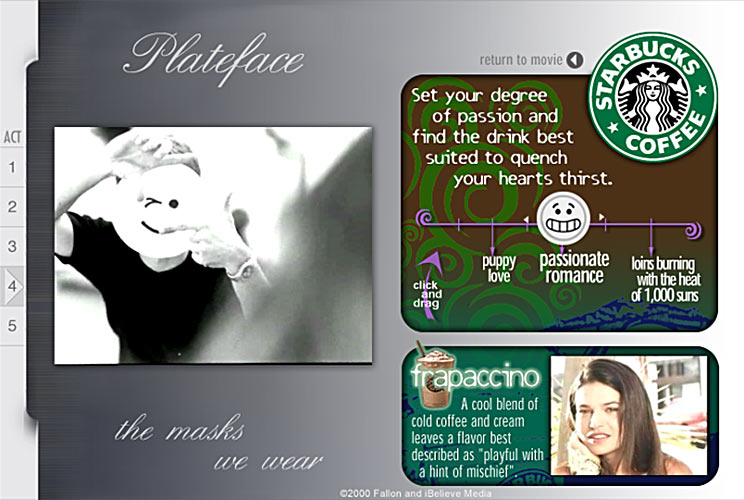 For a year Icecandy were based and worked in Los Angeles for iBelieve, the interactive division of Hollywood commercials production company Believe Media. We were at the forefront of advertising for broadband, when penetration in the US was only 10 million. Work consisted of several projects for the Fallon agency (Minneapolis), such as Plateface, which led up to preliminary work on BMW Films – one of the most successful online campaigns ever.

Plateface was a demonstration piece of an interactive narrative that included branding within the story. It was a broadband and CD-ROM piece that, online, incorporated streaming Real video and synchronised Flash animation. Woven into this comical love story – of a beautiful woman who falls for a man with a plate for his face – are products from Nikon, Starbucks and Nordstrom.

Also, during this time iBelieve created blu.monster: a unique, interactive music video conceived and written by iBelieve Director and digital entrepreneur David van Eyssen, for broadband and CD-ROM delivery. Based upon a rock opera written by Jimmy Tuckett and featuring his band Sub.Bionic, blu.monster was set in a mental health institute where Jack (aka Jimmy) believes he is changing into a machine. It was a cool blend of music video, web infotainment and interactive animation.

Other interesting clients that we worked with during this period were: The Beatles, working on animation concepts for their web site; Target and Dole Fruit, developing interactive marketing tools; Floria Sigismondi, a leading commercials and music video director, and film director Spike Jonze.